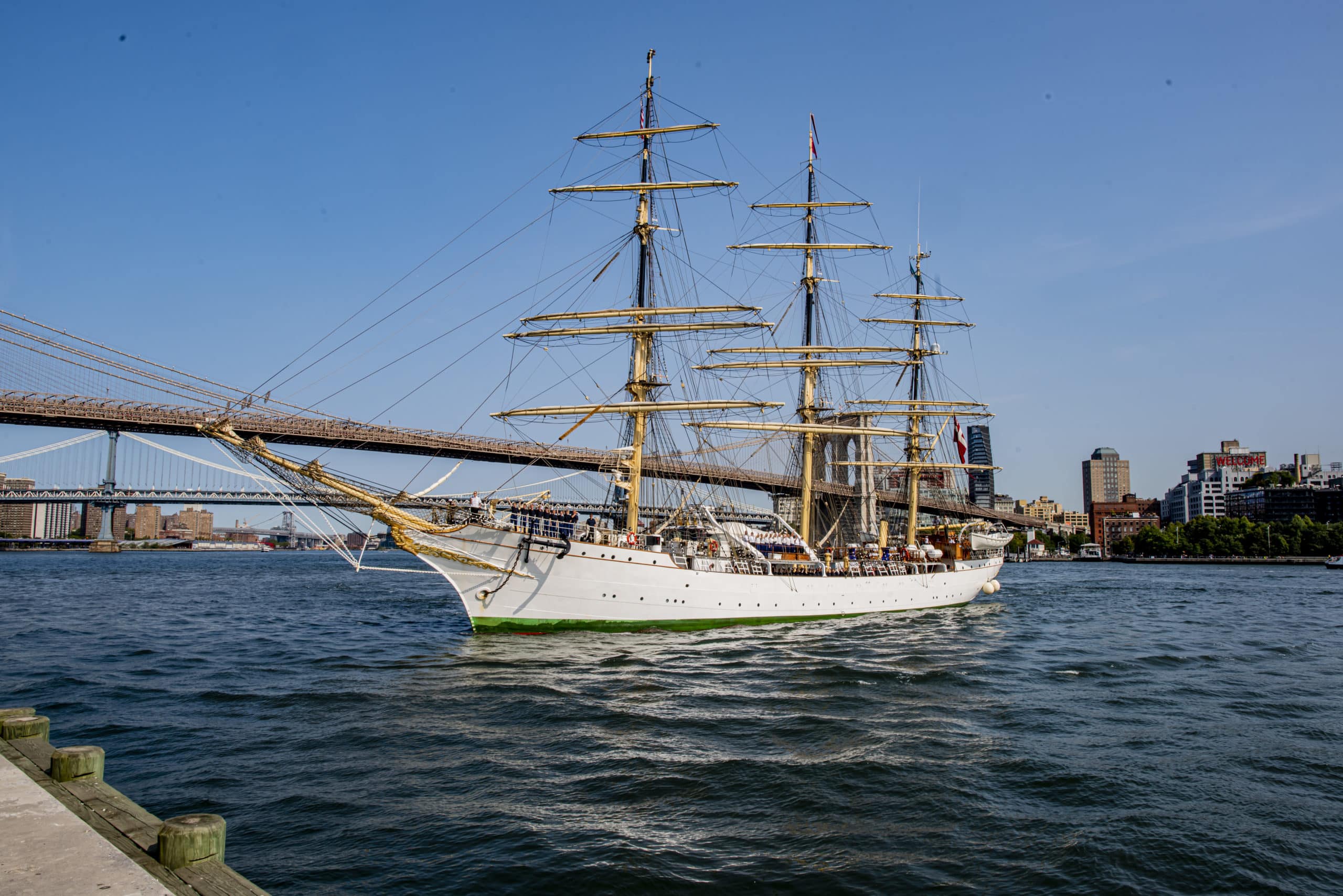 Sustainability. Life at sea. Historic connections and visions for the future. This year’s Climate Week NYC, taking place September 19–25, in conjunction with the United Nations General Assembly, will include more than 500 events, all of them exploring ways to drive climate action. Here at the Seaport, Climate Week will see the arrival of training ship Danmark, which members of the public can visit on Friday, September 23, and Saturday, September 24.

The steel-hulled, three-masted full-rigged vessel will be docked at Pier 17 during Climate Week, inviting visitors onboard to explore and talk to the 80 young cadets who have been sailing Danmark across the Atlantic as part of their training. The goal is to evoke conversations about how countries around the world can encourage their citizens to live a greener, more sustainable life.

The visit was, in part, inspired by Danmark’s past relationship with the U.S., and the seafaring history of Denmark that aligns with the maritime roots of our own neighborhood and nation.

First launched in 1933, Danmark has visited the U.S. on several occasions, including during World War II when the ship trained some 2,500 American naval cadets.

Dennis Englund, Market Director, UK & US for VisitDenmark, shares more about Danmark — and the role sustainability plays in the country of Denmark.

Danmark is said to be “loaded with Danish values and everyday wonders.” What are some examples?

Danish values are seen across the ship. Sustainability is of course a big one, with it being a sailing ship and primarily powered by wind. Gender equality is another big one. The cadets are 50/50, men and women. The education that they get on the ship is naturally focused on building their knowledge and experience at sea, but it is also focused on  what we in Danish call ‘dannelse’, which is about building culture, connections and life skills. For example, they start every day with a morning song, which is a Danish tradition, and the students also take part in the maintenance while on the ship. And additionally, they serve as ambassadors for Denmark while they are out sailing and can build international connections.

Denmark is a small country — but with 4,660+ miles of pristine coastline and 444 islands, the sea has always been at the core of our DNA. Danmark represents that, and gives us a unique platform to have conversations around an extraordinary sea and coast line and the impact on many aspects of our life — a world-leading gastronomy or the inspiration for a lot of Danish design and architecture, to mention a few.

Denmark is considered to be one of the world’s leading countries on climate change action. Why is this issue so important to the people of Denmark?

A high quality of life has long been at the core of how we organize our society, from free access to education, gender equality, eating healthy and sustainably, to the way we want cities and communities around us to contribute to that quality. That means less pollution, a cleaner nature, whether sea or land and, in particular, what we call livable cities where, all though being in a city, nature is an integral part of our everyday life. A good example is being able to swim in the harbors of all the major cities, including Copenhagen harbor. This has been a priority for decades, backed up politically and supported by world leading research and development within wind energy and other non-fossil energy sources.

Intrigued? Keen to learn more and contribute to the climate conversation? Danmark welcomes visitors to come aboard when the ship is at the Seaport on the evening of Friday, September 23, and the afternoon of Saturday, September 24. Learn more about the ship and its history here.

This initiative is co-hosted by VisitDenmark, the MARTEC Maritime, Polytechnic University College of Denmark, The Howard Hughes Corporation, and the South Street Seaport Museum.